Business shouldn’t want a “one size fits all” carbon price. Here’s why.

Responding to Canadian Chamber of Commerce

The idea behind the carbon tax is that consumers of carbon products will find their own most efficient ways of cutting carbon consumption. In theory, it seems simple. In practice, however, it’s a much more complex and nuanced endeavor. Politicians disagree. Economists disagree. And now, thanks in part to a new report from the Canadian Chamber of Commerce, it seems business doesn’t agree either.

The Chamber’s report entitled, A Competitive Transition, supports carbon pricing but doesn’t tell the whole story. Let’s be clear; carbon pricing can lead to lower greenhouse gas emissions (GHGs). But, it is not the only cost-effective policy available – a fact the Chamber ignores under the guise of reducing “regulatory duplication” and “supporting small business find their own path.” Granted, I did not see any small businesses sponsor this report.

Carbon pricing works best when paired with complementary policies that measure emissions and mandate, at least in the short term, low carbon fuels. It’s been proven in successful jurisdictions like California. It’s also an inconvenient fact for some and can manipulate conversations advocating for carbon pricing into thinly veiled attacks on renewable fuels policies. This report is no exception.

Biofuels are the most affordable low carbon fuel available and are compatible with existing infrastructure.

Claiming increased biofuel production would be a problem for Canadian agriculture and forestry, or that imported biofuels hurt Canada’s energy security is crudely false. Biofuels support domestic farmers and give life to agricultural products that were previously considered waste, such as wood residues. Regarding energy security, open markets are a good thing. It’s perplexing for “The Voice of Canadian Businesses” to now suggest otherwise in an effort to criticize biofuels and clean fuel standards.

Biofuels are the most affordable low carbon fuel available and are compatible with existing infrastructure. Yes, higher carbon prices would lead to higher use and uptake; however, economists have put the needed price for this at $200 per tonne. It’s hard to imagine this being a better path forward for Canadian businesses or the consumers who ultimately will pay the price.

If Canada is to succeed in reducing its greenhouse gas emissions in any meaningful way, it will be the result of a wide range of low carbon fuels and technologies in the mix, and a combination of policies in the market. There is no “one size fits all” policy that works for business and the same is true of the climate. It’s disappointing that a report that could have offered a valuable, business perspective on such a critical public policy discussion fell victim to this all too common pitfall. 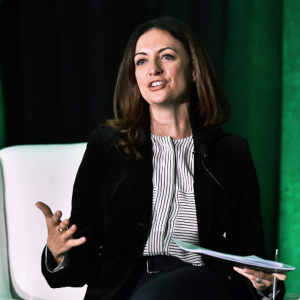 Andrea is an expert in clean fuels policy who often speaks across Canada and globally about the importance of renewable fuels and environmental technologies in the modern economy. Andrea served as President of Renewable Industries Canada and is a member of its Board of Directors. Andrea joined Greenfield Global in 2017 as its VP of Government and Public Relations.